Oh dear. Not good at all.  Down came the pergola on the back deck, weighed down no doubt by about fifteen years’ growth of wisteria.   I had noticed the previous day that it was very dark out there, and didn’t realize how thick the leaves had become on the top of the pergola.  We used to prune it fairly hard to stop it getting up into the roof- but obviously not quite hard enough. 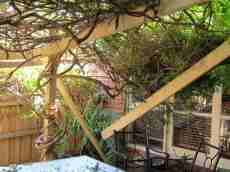 Oh dear. All fall down

My wisteria gave me much pleasure.  Sure, it dropped blossom and covered the deck with its purple haze, but it smelled beautiful and the bees loved it. 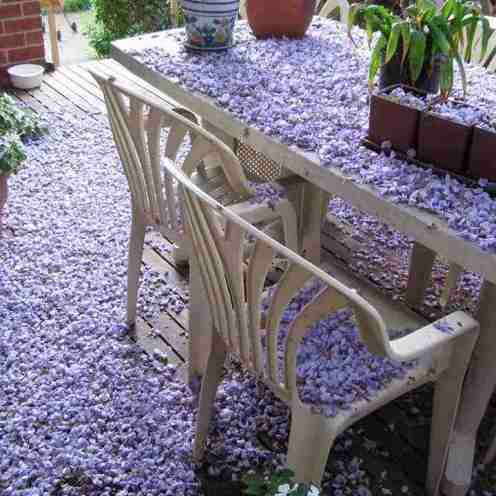 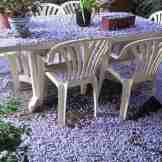 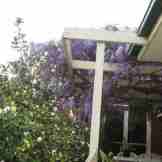 The original wisteria in all its glory

We spent all weekend pulling it down.  The pergola had rotted underneath it- in fact, I suspect that the wisteria was holding up the pergola rather than the other way round.  It looks very bare and glare-y out there.  I’ve had to cover the fern with a sheet. I think I shall call it Miss Havisham.

I used to love how green and cool it was under the pergola in summer looking out from the kitchen sink.  Not quite the same now. 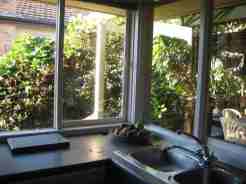 My deck and the large sliding doors leading into the dining room face north, so I’m keen to have another pergola with a deciduous vine, to get the winter sun and shade in summer.  I’m thinking an ornamental grape, hoping that it doesn’t have quite the voracious wandering habit of the wisteria.

But, oh dear, I do grieve its loss.  Yes, I know- first world problem.

This entry was posted in Uncategorized and tagged garden, Life in Melbourne, Macleod. Bookmark the permalink.