‘Instructions for a Heatwave’ by Maggie O’Farrell 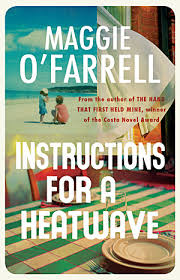 On a hot July morning in 1976, recently retired  Robert Riordan gets up from the breakfast table and announces that he’ll pop out to get the newspaper. He doesn’t come back.

His wife of 40 years, Gretta waits a little while, then calls her children. Two of them, anyway: school teacher Michael whose wife is growing away from him as she becomes increasingly engrossed in her Open University course, and Monica whose relationship with her stepdaughters is strained and leaching into her second marriage with an older man.  Gretta can’t call her youngest daughter, Aoife in New York, because she doesn’t know her number.  Aoife, who has struggled with dyslexia all her life, has a job as a personal assistant to a photographer she admires, and is just embarking on a new relationship. She had fled to New York after a falling out with her sister and had cut off all contact. But once the word is out, all three children come home to help find their father, trailing their disappointments, anxieties, tensions and resentments behind them.

The action stretches over four days, but a very long four days in narrative terms because so much of the story is being told in flashback- not a technique that I’m particularly fond of.  The focus shifts from one family member to another, with the exception of the absent Robert, who is just as ‘missing’ in the book as he is in the plot.

The book is set against the 1976 heatwave that roasted London with sixteen consecutive days over 30 degrees.  English houses are not built for heat, and water restrictions were imposed.  (There’s some good photos here). I must admit that as a reader more accustomed to antipodean heat waves, it didn’t quite capture heat as we know it here . We were being told about the heat, but as a reader, I didn’t feel it.  What I did feel was the oppression of family arguments and pain, and the burden of secrets.

I read this for bookgroup and it was a good bookgroup choice.  It always sounds a bit patronizing saying that, but it was the sort of book that nudged you into making judgments and taking sides.  It was certainly easy to read and my interest in the characters ensured that I didn’t particularly care one way or the other about what happened to Robert, and whether he did get that newspaper after all. The book’s not really about him at all, or the heat, for that matter.  It’s about families and secrets, and choices and their consequences.

This entry was posted in Book reviews, The ladies who say ooooh. Bookmark the permalink.

2 responses to “‘Instructions for a Heatwave’ by Maggie O’Farrell”