‘The Forgotten Rebels of Eureka’ by Clare Wright 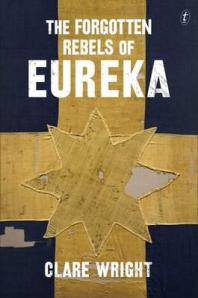 All Australian schoolchildren – and perhaps Victorian ones in particular- at some stage (and often more than once) encounter the Eureka Rebellion.  It’s quite a flashpoint in a constitutional history that has rather a dearth of such things.  Ballarat has made good tourist use of it. The  Sovereign Hill Tourist Park has leveraged its sound-and-light show from it for many years, complete with burning hotels and gunshot.  As well I know, having visited Ballarat many times.  We used to go to there every September for the South Street Eisteddfod, first to see a niece on the stage, then to see  a daughter. Bakery Hill (now dominated by McDonalds) and the stylized stockade on the site that is now the Museum of Australian Democracy are very familiar to me.  But even for those not subjected to the icy Ballarat winds every September, Eureka is something that you tend to ‘do’ at school and tuck away as part of your Australian consciousness.

Clare Wright’s book The Forgotten Rebels of Eureka is big, bold and different.  Published by Text Publishing in hardback only so far, it takes the Eureka uprising and puts people into it: particularly women and children, but also storekeepers, commandants, theatre owners, newspaper proprietors and publicans.  It’s a noisy book.  Her opening sentence to Chapter One is

You could hear Ballarat before seeing it. (p. 19)

and voices clamour in this book for attention.  It teems with personalities, some of whom recur frequently, others who are encountered once then pass by.  Wright is the politest of guides: she takes you to her main informants and introduces you to them properly.  It’s a technique that Inga Clendinnen used so masterfully in Dancing with Strangers, and Wright uses it well too. Not only do you have a leap of recognition when you meet them again, but you’re able to detect change of mood and circumstance and gain some sense of people living through an event instead of being just stationary props.  And they talk!  Letters, diaries, memoirs-  Wright has combed carefully and weaves their words into her text as italicized phrases, only rarely and deliberately breaking her narrative to provide block quotations.  While the book is crafted from primary sources, she carries on a conversation with other historians as well, both in the text and in the footnotes that, commendably,  Text has not stinted on,  in what could probably be marketed as ‘popular history’ (whatever that means).

The book opens on Monday 4th December 1854.  On the preceding morning at 3.00 a.m.  troops and police had stormed the hastily constructed stockade in a twenty-minute attack.  The numbers killed are still debated. But the goldfields themselves that morning were quiet.

In Part I, ‘ Transitions’, she rewinds to November 1853 as one of her main informants, Charles Evans (thought to be Samuel Lazarus until Wright’s own research identified him correctly) arrives in Ballarat.  He was just one of a flood of gold seekers who arrived in Melbourne,  and Wright traces through the arrival experience as the tide pulls him, along with a bobbing host of other characters, to Ballarat.

Part II, Transformations, takes the year 1854 as its site of analysis, drawing a vivid, bustling, LOUD picture of goldfields life.  But its not the ‘digger and his mate’ experience of an S. T. Gill watercolour.  As she points out, Ballarat was not the male-dominated diggings of our imagination.  With 6650 women, 2150 children and 10,700 men, it had the highest female proportion of any of the Victorian goldfields.  While there were shafts and tailings and mud, there were also clothes lines sagging with washing,buying and selling, visiting, entertaining, and babies being conceived and born as a shadowplay on the walls of flimsy tents.

Part III ‘Transgressions’ moves to Spring 1854  and the burning of Bentley’s hotel and its aftermath in the courtrooms of Melbourne.  We’ve been in this hotel before, with Catherine Bentley, the publican’s wife.   Wright takes us to the military camp on (of course) Camp Hill and the administrative play between the newly-arrived Governor Hotham and the military and police contingents.   The action moves inexorably to Sunday morning 3rd December 1854 where it slows down, then unfolds in a nightmare slow-motion.  She does not spend much time on the battle itself- leaving that to others- but instead watches the raw, keening grief afterwards.  In a rapid shift of tine, her concluding section ‘A Day at the Races’ has a brisk “move on” feel to it as the events of Bloody Sunday are commemorated, forgotten, rediscovered, burnished, embroidered and used for various purposes.  An epilogue bids farewell to the characters we have met as they drift away from the gold fields into other endeavours, or become entwined into family trees diligently tended by their genealogist descendants.

While Eureka is the flashpoint, the real strength of the book is peopling the event and the wider context with flesh and blood, often unknown characters.  The emphasis is very much on women, and writing them back into the story that they always inhabited- but it’s not just about women.  There is a conscious emphasis on Jewish emigrants, American gold-seekers and a consciousness of the Aboriginal people whose lands were deluged by this flood of humanity. Nor is it just about the rebels, because she distinguishes carefully between the military and the police and explicates carefully the politics of Eureka from the government perspective as well.

Nonetheless, there is a very strong feminist intent to the book.  It is, perhaps a little strained, as in her explanation of the drifting away of men from the stockade in the hours immediately preceding the attack and her suggestion that rape might have been one of the outrages committed in the aftermath.  Both of these are offered only as suggestions- and historians can make suggestions, with evidence- but at this point the murmurings and conversations of her informants who have borne her so confidently through the rest of the narrative drop away, and it is only her voice left speaking.

And a distinctive voice it is.  Clare Wright often appears on Australian history documentaries- for example, in Utopia Girls– where her narrative voice is warm, with a burble of humour.  It struck me when reading this book that it is a particularly visual work, staged and narrated much as a lengthy documentary might be.  The chapters are divided into scenes, marked with asterisks, as the action swings from one character to another, and many conclude with ‘cliff-hanger’ comments that lead onto the next scene.  It is sustained throughout the whole book, which at 458 pages is a lot of talking.  It is such an insistent, strong voice that I think that your response to the book would be very much influenced by how you respond to the teller.

That said, this is one of those books that would make you look at familiar events with new eyes.  It is a compelling read that is well-researched and scholarly and at the same time very, very human.

Yvonne Perkins at Stumbling Through the Past has written a very detailed review- well worth reading.

This is my first review for the Australian Women Writers Challenge 2014.

19 responses to “‘The Forgotten Rebels of Eureka’ by Clare Wright”