Walter and Marion Griffin in Heidelberg

As you probably know, 2013 is being celebrated as the centenary of Canberra.  These celebrations have included a retrospective look at the vision of  a new capital, for a new nation,  that was produced in the designs of American architect Walter Burley Griffin and his wife Marion Mahony Griffin.    But the Griffins’ influence extended further than just Canberra.  Central Melbourne and surrounding suburbs and Heidelberg/Eaglemont in particular,  bear traces of the Griffins’ influence in buildings, homes, industrial constructions and subdivisions that they designed. Heidelberg Historical Society has an exhibition until November 24 that addresses the other designs of the Griffins in Sydney, Melbourne and even India

There are four Griffin houses in Heidelberg and Eaglemont and over the past few years I’ve been lucky enough to go into all of them.  The Murray Griffin House was on the market a few years ago and I saw through it then, and Lippincott House was open some time ago.  Earlier this year Pholiota in Glenard Drive and the Skipper House in Outlook Drive were  also open.  What a privilege to see inside.

Pholiota and another Griffin House, Lippincott house are side-by-side in Glenard Drive.  Lippincott is a striking house with a very steep roof and characteristic ‘Griffin-esque’ windows.  The house has a lot of dark wood in it and it feels very snug.  Yet the abundance of windows offsets the darkness and brings the garden into the house.  (Click to enlarge any of the pictures)

Lippincott House seen from the front of the house that surround Pholiota, next door

Pholiota is not visible from the street because a 1940s red brick house has engulfed it completely. It’s difficult to photograph because it’s not visible at all from the front and  it’s hard to get enough distance from it in the backyard.  It is an unusually pinky-red colour with, again, those Griffin windows.

Pholiota – you can just see the Knitlock brickwork

You need to walk through the 1940s house to get to Pholiota.  It’s almost a bit like Anne Frank’s Secret Annexe- a house within a house.

You need to walk through the lounge of the 1940s house to enter Pholiota.

This is taken from Pholiota, looking into the 1940s house at the front.

The Griffins themselves lived in this house and they were very fond of it- in fact, Marion described it as “the cheapest and most perfect house ever built”.   Where we today design a house to suit our lifestyle, I think that anyone living in Pholiota  today would find that the house would dominate their lifestyle completely.  On the other hand, only someone willing to fall under the spell of the house would live there.  The house itself is a simple square.  There are not rooms as such: instead there are alcoves.  Click on this link  to  a picture of the room in use as the Griffins intended it here –it’s the Walter Burley Griffin site- well worth a look!

This drawing shows the original design of the house:

The middle of the house is now dominated by a large table and this really is the beating heart of the house.  The kitchen is rather rudimentary.  This would be a rather demanding house to live in, but I should imagine that it would give much pleasure.  It would change you.

The large table in the centre of the room

The original entry at the side

The kitchen. Not a lot of bench space!

The Skipper House is some distance from the two other houses.  What a beautiful, light house this is! It’s amazing to think that it was designed in 1927. I think that this is my favourite. 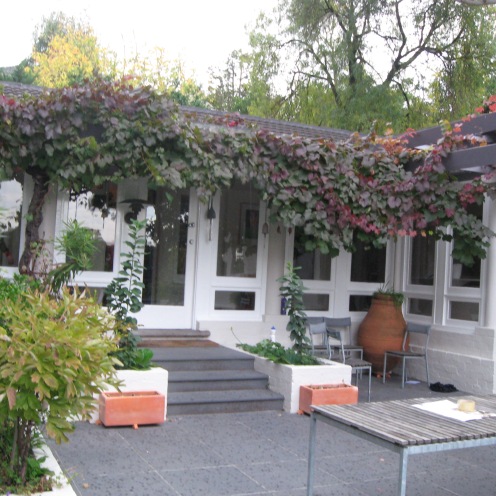 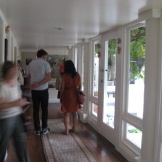 The hallway runs along the front of the house with small rooms opening from it. The roof is rather low 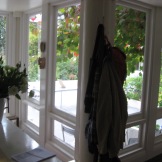 There are beautiful corner alcoves 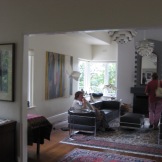 The magnificent lounge room. The fireplace was striking

What is often overlooked is the Griffins’ work in landscape. Griffin designed both the Mount Eagle and Glenard estates with shared communal parkland space. The parks have a rather anomalous status and are not public but not entirely private either.  Some are very well cared for, while others are barely more than car parks which I guess reflects the diversity of attitudes towards landscape and space generally.  But the whole concept of communal open space, shared with neighbours, yet with a sense of ownership and responsibility reflects a philosophical attitude towards ‘how we should live’ that flows through many of their residential designs.

And remember- Heidelberg Historical Society’s exhibition is on until 24th November.