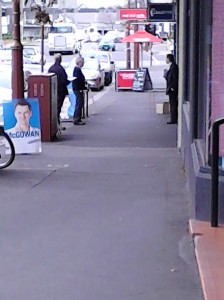 Three weeks? you might ask.  Surely with postal voting, there’s no need to have early voting three weeks ahead of the election.  A week before, maybe- but three weeks? Two- or three-hour shifts for party members handing out how-to-vote literature between 8.30 and 5.00, five days a week for three weeks.  That’s a lot of volunteers- quite apart from the ones you need for letter-boxing and manning the booth on the day.  Surely it could be postal voting until a week before the election?

It would have been a bit bleak in the cold winds of last week (20th-24th August) but I must admit that it was quite pleasant last Tuesday when I was there.  I’ve never experienced any animosity between people handing out how-to-vote cards representing different parties at polling booths and Tuesday was no exception.  On the contrary: it seems that, this election particularly, no body is particularly happy with the choices on offer. 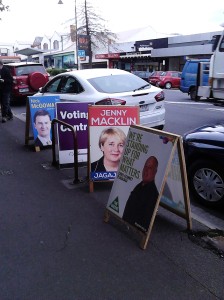 I was surprised by how many people came to vote.  I don’t think that five minutes went by without someone coming in.  These days parties are holding their launches as little as a week before the election, withholding their figures until the last days of the campaign, and drip-feeding their policies in yet another confected photo-opportunity over a four-week period.  Yet, you can vote three weeks ahead if you want to.

This voting booth is located in a former JB Hi-Fi shop that is on several levels. It claims to be wheel-chair friendly, but it’s not.  There’s an unusually high step to enter the shop, with very  narrow ramp that can be used to get to the door if you can’t negotiate the step.  But it’s not a proper ramp and once you enter, there are then about three further steps without a hand-rail to negotiate.  There is a voting booth on the entry level, but someone has to alert the staff at the back that a voter needs to access it.  I don’t know how some people would have been able to enter had it not been for the party volunteers outside who took off their badges and left their leaflets with someone from the opposing parties to distribute (which they did) in order to help someone up the stairs and tell the staff that someone needed to use the street-level booth.  It shouldn’t require this much assistance in something that is supposed to be accessible.

Then there’s the voting paper itself.  Do we really need 97 candidates in the Senate?  You can choose to vote ‘1’ in the Senate and the pre-arranged preferences will flow from that- but who do these preferences go to?  The presence in the Senate of ultra-conservative Family First candidates who were voted in through the re-distributed preferences from progressive parties is a cautionary tale.  I checked the website of the Greens but there is no information there, and when I emailed them to ask they referred me to the AEC site.

It took some finding, but it’s there.  Ye Gods.  Second preferences for the Greens? The Wikileaks party. Great. Not.  And is there a nice little print-friendly version that you can download to take with you if you’re going to grit your teeth and fill in the 97 boxes?  Nup- just the one version that has all the voting preferences of every grouping (all 4366 permutations) with  Danny Nalliah of the Rise-Up Party as the number one candidate because he lucked out in the candidate draw. (No doubt the result of prayer.)

Then there’s the ticket viewer at  Below the Line at http://www.belowtheline.org.au/viewer/vic

It has a rather natty little tool where you can compare the tickets of two groupings by selecting the grouping you want from the pull down box and all the names will miraculously re-arrange.  You can see two different voting patterns side-by-side if you select two different groupings. But there’s no facility for a print-out showing the preferences in the order that they will be shown on the voting paper to take with you on this site either.

So, you have a choice of numbering just ‘1’ or filling in 97 boxes. How about something in between- 10 perhaps?  At what point does too much choice become undemocratic?

Humpf. I told you I was grumpy.