Trains and planes wait for no-one (even though we certainly wait for THEM!) so I attended only one session of the Conference today and had to leave before the final plenary.  Yvonne Perkins at Stumbling Through the Past may write about it, as she has also been blogging the conference. 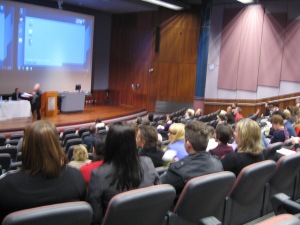 The theme of the conference was “Mobilities and Mobilisations in History”.  Many of the papers addressed the first theme, but the final session that I attended was focussed on the second: ‘Mobilising Australia in World War II’. Some late arrivals and car breakdowns meant the presentations did not follow the order in the program, so I’ll report them in a more logical progression than I heard them.

As Jennifer Sloggett’s paper ‘ Mobilising NSW for civil defence 1935-1942’ showed, the planning for civil defense began before war had even been declared.  Along with the rest of the empire, Sydney began to make  preparations for the possibility of  gas attacks in May 1935.  Sydney was in the vanguard of civil defence planning because of its location directly on the coast compared with the inland location of Brisbane and the protection of Port Phillip Bay for Melbourne.  Civil Defence included things like lighting restriction, sirens, shelters, sandbagging, boarding windows, placing barbed wire on beaches, evacuation plans, impounding of boats, evacuation and devising a scorched earth policy.  The National Emergency Service that was created as part of this planning was ten times larger than its current incarnation, the SES. In declaring the Zone of Compulsory Protection in parts of Newcastle, Sydney, Wollongong and most of Lithgow, the emphasis was in protecting equipment and industry rather than people.  The zone extended inland for only 100 miles on the assumption that planes could only fly in that far from aircraft carriers.  Planning for civil defence was not, as has been argued by some historians, a knee-jerk response, but it was based on flawed reasoning extrapolated from WWI bombing raids.

Lisa Murray, a historian with the City of Sydney examined the industrial suburbs of Waterloo, Alexandria and Redfern as part of her paper ‘Industrial mobilisation for war: local and community stories’.  There had been a huge increase in the density of industry in these areas between 1929 and 1944, and during the war these factories were almost entirely turned over to war production.  Murray’s paper focussed on the experience of women in particular, and their fear of the powers of the Manpower Directorate and their discontent over the conditions in the factories with few holidays, long shifts, inadequate bathrooms and hostility from the male workers.  It’s often small things that become problematic and  I was struck by her example of the difficulty of ice-deliveries (of all things!) when a woman could not be home to take delivery of ice to refrigerate their food, because she was rostered on at the factory at the time.

But wars do eventually draw to an end, and the ending of war has its own challenges and imperatives. Georgina Fitzpatrick spoke on ‘Mobilising for law: recruiting personnel for Australia’s war crimes 1945-51’ which dealt with the recruitment of lawyers to prosecute and hear trials in the War Crimes Tribunals that were established in several locations in Asia.  Some of the legally-trained soldiers were allocated to the Australian Army Legal Corps (AALC) as soon as they enlisted; others were placed in regular battalions with their legal training overlooked until the end of the war. One remarkable man- Major Dick- survived Changi POW camp and returned to Australia to seek a job in the law, but was turned away because firms were reluctant to hire people who had been away from the law (!) . He joined the AALC and was sent back to Singapore.  Other lawyers and solicitors, who had been too young to enlist for the war, volunteered for the AALC in the immediate aftermath.  The Japanese defence teams, now themselves prisoners of war, found the Australian law procedure culturally unfamiliar, and received assistance from Australian prosecutors. Fitzpatrick said that contrary to her expectations, the War Crimes Tribunals were not bent on revenge.  There were some death penalties inflicted, but many of the Japanese accused were acquitted because of insufficient evidence and those sentenced to 1-10 years imprisonment were all paroled by 1955.

And just as the war had to end, so did this conference.  Off to the station, onto the train, down to the airport, up in the air and – home.

You can download the full program of abstracts by clicking the link below.

This entry was posted in AHA Conference 2013. Bookmark the permalink.

One response to “AHA Conference 12 July”