I had to go to the dentist this morning for a 9.00 a.m. appointment.  I had originally thought that at least I wouldn’t have to wait for long, but then I started to wonder if maybe I would have a longer wait than anticipated.  Why? Because in my mind’s eye I can see hordes of Sunday Age readers, all sitting desperately in dentists’ waiting rooms, with their teeth clamped shut. 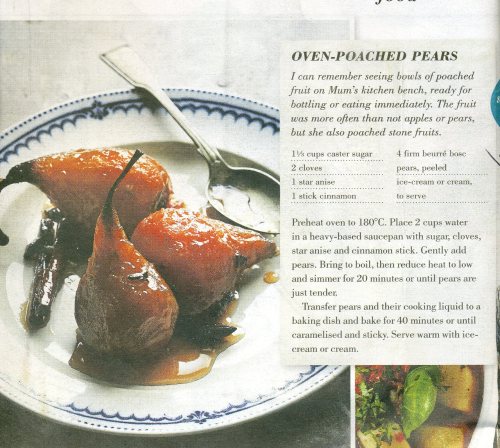 Beurre bosc pears?- check.  Cinnamon stick?- check.  Star anise?- no, but  I bought some. In went the pears to cook in the saucepan for 20 minutes or until the pears were just tender.  Well, it was a good 30 minutes before I could persuade myself that perhaps they were slightly more tender than when I put them in half an hour earlier.  Into the oven, 40 minutes, 50 minutes, 1 hr 15 minutes- ye gods, they still looked like albino walruses wallowing in barely coloured syrup and as hard as rocks.  So, in desperation, back onto the stovetop to somehow make them “caramelized and sticky.”

Well, that worked.  So well that once they hit the bowls, they clamped immediately onto the bottom, only to be shifted by multiple applications of boiling water and soaking over night.  “Mmmm” we said, taking a mouthful of pear, only to realize that the caramel set like cement between our teeth.  “Mmmm” was all we could say, really. That, or “mmnnnngggttttsssshhhh”.

You can keep your oven-poached pears Mr Grossi.  Dentists throughout Melbourne and Sydney (and anywhere else the Sunday Life is published) thank you.  I don’t.

Posted in Things that make me laugh

I find it hard to review a collection of short stories.  Usually the stories themselves have been written over a period of time and published in multiple journals, rather than written with a themed collection in mind.  If there is a theme, it is detected more in the act of collecting than in the act of writing.  That said, writers often work out a theme in a variety of ways, as if they are circling it, coming at it from different directions.  It’s also difficult to talk about stories that themselves only take up about 10 pages or so, especially if the reader of the review hasn’t read them.

This collection is somewhat easier to talk about, because the title ‘Forecast: Turbulence” is such a strong theme that emerges from these stories.  They are all about family members in turmoil, and nearly each one makes reference somewhere to the weather which in many ways reflects the pain and turbulence inside.  In many ways, it is a blessing that these ARE short stories:  ‘Weather Maps’ in particular, about a young woman cutting, is so intense that you wouldn’t want to extend for much longer.  The most memorable of them for me is ‘Afterlife of a Stolen Child’, which revisits the kidnapping of a child many years previously, from the perspective of the family members and a man who believes that he is the missing child.  The narrative revolves between the main protagonists, and it leaves the reader just as unsure and ambivalent as the characters find themselves.

I felt as if there were flashes of her other work in some of these stories.  ‘The Republic of Outer Barcoo’, for instance,  reminded me of her book Oyster for its outback setting of a cult.  Several of the stories involve fathers.

The final story ‘Moon River’ is a memoir, and here the author speaks in her own voice.  It is the most Australian of the stories, set in and around Brisbane.  It is attached almost as a coda, and it does change the feel of the rest of the stories.  It’s as if the author has stepped out from behind the curtain.

Read because: it was our April read in the Australian Literature online group and as part of the 2012 Australian Women’s Writing Challenge