‘Incest and influence: the private life of bourgeois England’ by Adam Kuper 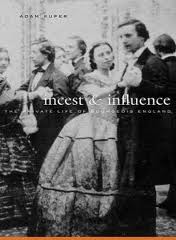 This book is nowhere near as kinky or Marxist as the title suggests.  Neither of the two forms of ‘incest’ described (cousin marriage and in-law marriage) are viewed that way today, and the ‘bourgeoisie’ is defined not so much in economic terms but as a network  of influence.  So if you’re going by the title, you may be led astray.

Cousin marriage, according to the Attorney-General’s web is not illegal in Australia (although it is in some states in the US), and there is no prohibition on in-law marriage with a dead partner’s sibling.  Yet both these relationships have been controversial in the past, with a mismatch between legal regulation, practice and literary depiction.   Cousin marriage, for example, occurs repeatedly in Victorian novels but its legal status was uncertain for many years, and the first chapter of the book explores the literary depiction of cousin marriage in some detail.   In-law marriage was even more legally contested, with even the Bible providing contradictory examples.  There were many examples of in-law marriage in the Old Testament, and Deuteronomy 25:5-6 made it the duty of a younger brother to “raise up seed” with the widow of an older brother, at least in certain circumstances.  An alternative theological stance, however, was that in the act of a man and wife becoming ‘one flesh’, one’s in-laws therefore became blood relatives.  This was the argument that Henry VIII used in seeking to annul his marriage to Katherine of Aragon, but then several marriages later had to wriggle in the opposite direction in order to marry Katherine Howard who was Anne Boleyn’s cousin (and hence under the ‘one flesh’ scenario, also his cousin).  While the technicalities were of crucial importance to the king and hence the succession, it was of less importance to the population at large.  In fact, it suited everybody’s purposes to have the law about in-law marriage  left rather ambiguous until Lord Lyndhurst ushered through an act of Parliament that made in-law marriages  illegal after August 31, 1835.  The deadline was crucial.  Lord Lyndhurst was acting to assist the seventh Duke of Bedford who had married his dead wife’s half-sister.  The inheritance of the son born from this second marriage could be challenged, and hence the cut-off date to ensure that it did not apply to him.  The law lasted for 60 years until it was repealed, largely because the colonies allowed this form of marriage.  Many people were caught up in the legislation, and it made illegal a form of marriage that had arisen quite naturally in many situations.  It was common for a sister to take over the care of her motherless nieces and nephews after a death in childbirth, and such a marriage could be seen as an act of fidelity on the part of both the husband and the sister.

Kuper then goes on to examine three different constellations of  marriage among three prominent circles of influence:  the Wedgewood/Darwin Lunar Men group, the Clapham Sect of Wilberforces, Thorntons, Stephens etc who were influential in the abolition of slavery, and finally the Bloomsbury circle.  This last group jarred a little because, not only was it set chronologically and hence historically in a different era, but also because bonking each other did not carry these same weight of marrying each other in order to cement family interests.  The book here relied on a fair bit of prior knowledge, and the genealogical details became rather tedious- almost as eye-glazing as the ‘begats’ in the first books of the Bible.

Darwin is a crucial figure in this study because, not only was his family thoroughly enmeshed in the tangled web of cousin and in-law marriage, but his own theory of sexual selection and inherited characteristics led to a re-evaluation of the dangers of cousin marriage, although members of the wider Darwin family took opposing views on the dangers of first-cousin marriages. The book closes with a fast-forward description of legislative and demographic changes over the course of the nineteenth and early twentieth centuries.  It points out during the 1920s the eugenics movement condemned cousin marriage and these scientific concerns passed into the general culture, leading to a decline in cousin-marriage numbers in both middle and upper class families.  However, even more influential may have been changes in business legislation which made limited liability a useful option for medium-sized firms who no longer had to keep marriage (and hence the money) ‘in the family’ in order to protect their assets. The imbalance of the sexes after WWI also affected cousin marriage, and the reduced size of families meant that there were fewer marriagable cousins to choose from anyway.

It does come as a bit of a jolt in the final demographic chapter, then,  to realize that the proportion of cousin marriages that he has been describing was always very small to begin with.  The figure of around 8-12% for bourgeois families is used early in the book, but then modified downwards to between 3-5 and 4.5 among the aristocracy and upper middle class half-way through.  It seems to have remained steady at between 4-5% throughout the nineteenth century and no percentage figures are given for the 20th century so it is hard to compare.  It would seem, then, that the convoluted marriage patterns that he describes in the three family constellations were rather more exceptional than he suggests, and that a more important question might be why nineteenth-century novels emphasized cousin and in-law marriage so much as a plot device when the statistical reality was so different.

Sourced from: Queensland University of Technology

Read because: I saw it at the new Readers Feast bookshop in the city, and thought it looked interesting.