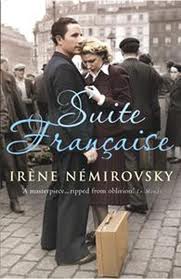 I purchased this book in the flurry of publicity that greeted its arrival in English translation.  It came with such a wonderful back-story: the 60 year old manuscript lugged around in a suitcase by her orphaned children after their parents were murdered in the Nazi extermination camps finally becomes a world-wide bestseller.  But, as often happens when I simply have to have a particular book, once purchased it sat in its paper bag beside the bed for a few months until it shed its packaging, was put on a bookshelf and joined the long line of books that “I really must read  one day”. By the time I did read it, five years later, I had forgotten the back-story and I’m glad that I did, actually.  It meant that I approached the book just on its own merits without the publicity hype.

The volume contains two separate books in effect, conceived as part of a larger work.  The two books are only tangentially related, quite close to the end.  The first, “Storm in June” focusses on the panic of Parisians just before the German army took over Paris.  In a way, it reminded me of A Woman in Berlin in its depiction of  the physical fear of the oncoming victors and the awareness of being on the wrong, losing side.  There is haste and panic, but there’s also that slow-motion inevitability that life is about to change for the worse.  Nemirovsky draws together a number of smaller stories: a husband and wife who work for a bank whose son is missing at the front; an art connoisseur; a wealthy family with their old, ill father-in-law- there’s several stories running in parallel here.  I must admit that it took me until about p. 150 before I was able to distinguish one from the other and pick up their story without flipping back to remind myself who they were.  No-one comes out of this scenario covered in glory:  the rich are self-centred, hypocritical and selfish, and the poor and teeming masses are desperate as well.

The second book “Dolce” picks up on a small rural community once the Nazi occupation is underway.  A new cast of characters is introduced, but the narrative focuses particularly on Lucile, whose older husband has been captured as a prisoner-of-war, and who lives uneasily with her hypercritical mother-in-law.  German soldiers billet in the villagers’ homes, where they are treated with varying degrees of sullen resentment, hostility, resignation and even curiosity and attraction.  It is only at the very end of the second book that tenuous links are drawn to the characters in Book 1, and you catch a glimpse of the wider vision that Nemirovsky had for her work.

The appendices flesh this vision out for us.  She kept a notebook while writing where she mapped out the wider arcs of the plot and her ideas for the work as a type of symphony with different acts.  She refers several times to Tolstoy’s War and Peace, and even before reading these notebooks I had detected the parallels.  Like Tolstoy, she paints  a broad historical canvas by depicting small, intimate, domestic relationships that intertwine and contrast with each other.

The final appendix is a series of letters written by and to Nemirovsky as the Nazi threat becomes clearer.  We see her husband and friends anxiously combing through her earlier published works, looking for evidence that they can use to argue for her release from arrest, little realizing that she is already dead.  The book closes with the biographical preface that appeared in the French edition when it was first published in 2004.  In this we learn that Nemirovsky was from a Russian Jewish family that had emigrated to France early in the 20th century, and converted to Catholicism- but none of these things were enough to save her from Auschwitz.

I’m glad that I read this book in the order and at the time that I did.  Had I read it earlier, I think I would have been tempted to read the appendices first and this would have shaped my response to the book itself  As it was,  I encountered the book first, incomplete and perhaps undeveloped though it might be in the whole scheme of the larger opus, and it stands up well.  It makes her ending even more tragic, if that’s possible.