When my presumably yet-unconceived grandchildren say to me “Nanna, what did you do about climate change?” I shall say to them “Well, I bought strange light globes and I walked backwards in the City Square on the weekend before the 2010 election.”

Yes, there we were on a day that seemed particularly un-globally warm, with our hands on the shoulders of the person in front of us, walking back wards along the length of the City Square.

Walk with the people, not the polluters! Climate action now! (Ouch, ouch!)

as the person in front of me (aka Mr Judge) stepped on my toes as we were were “moving backwards” for climate change, as distinct from “moving forward” as we all were at the start of this election campaign a very l-o-n-g five weeks ago. 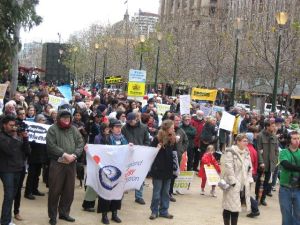 (There’s Mr Judge looking all rugged up for global warming to the left of the woman holding the white banner).  Back, back we shuffled, “walk with the people…” etc. until I could feel the crowd pressing behind me.  Was there about to be a dreadful crush? “Tree, tree” hissed someone behind me, and sure enough I turned round to find myself pressed up against one of the few spotted gums that survive the blasted heath of our so-called City Square. 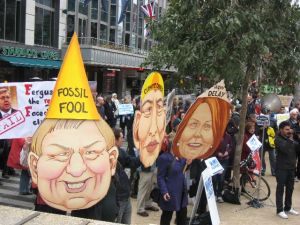 Yes, grandchildren of mine (one day), when the planet was there to be saved, your Nanna was there.

And for those of you who may have arrived at this site through other links, I do want to make it clear that I am deeply concerned about the lack of leadership and mealy-mouthed response to climate change from our major parties- the Labor Party in particular.  I feel disempowered as a citizen by the money and influence of the fossil-fuel and mining corporations.  This was a quirky and in many ways incongruous public event, and I’m glad that I attended it.

This entry was posted in Current events, Life in Melbourne. Bookmark the permalink.