What you talkin’ about, Kevin? 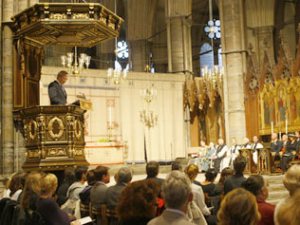 Speaking from the abbey pulpit, Mr Rudd said the fires had been an “assault on the soul” for Australians.

“We, as Australians, were left speechless in its wake.”

Silent and still?  Not on that Saturday it wasn’t.  Not for the people actually in the fires, with the fire roaring and screaming over the hills towards them.  Not for the people of Melbourne, listening to the  chatter and urgency of radio reports all day that somehow seemed to miss the intensity and horror of it all.  Not when the wind changed.

Silent and still the next morning, perhaps.  When we woke to hear of whole, familiar places devastated; when the death toll kept rising and rising; when you realized that everyone knew someone.  That was when all meaning seemed to leach from everyday life, that was when we became speechless.

Let’s not rewrite it just for the sake of imagery and a good speech.