The Long and Winding Footpath 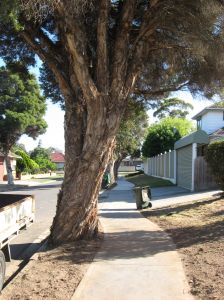 How wonderful!  Banyule council is replacing the footpath outside my house where the tree roots have broken it, and has created a meandering promenade, curving around the trees!

I’m really pleased that they’re keeping the trees in the nature strip, despite their unfortunate similarity to broccoli.  So many trees have been pulled down recently for higher density housing- and yes, we’re guilty here too because we  knocked down a beautiful Japanese maple when building our dual occupancy houses.  But we did manage to save one of them.

The drought has taken its toll too: we have a large maple in the back yard which is looking decidedly unwell. Many trees were lost during the storm earlier in the year, and people who had been eyeing large trees with some trepidation have taken them out for fear that they will fall one day.

All this year the magpies have brought me much pleasure with their warbling and carolling. They’ve taken to our large (sick) maple because a huge tree next door was pulled down for development.  One of the things I love most about my suburb (next to its 1960s-oldfashionedness) is the trees, and I’m pleased to see the council doing its bit!

Posted in Life in Melbourne