‘Beyond the Ladies Lounge’ by Clare Wright 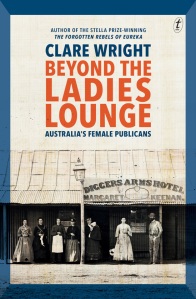 My parents were teetotalers, and even though I’m not  a teetotaler by any stretch of the imagination (cue laughter from my husband), I was certainly influenced by my parents’ distaste for the dull roar and acrid smell of beer that emanated from the corner pubs of my childhood. Growing up in the time of the ‘six o’clock swill’, and with the quaintly lettered ‘Ladies Lounge’ etched into the stained glass of pub windows, the pub seemed a threateningly male place. But as Clare Wright reminds us in this book, this was not always the case. Female publicans have a long history, right back to the earliest days of white settlement, and at the end of the nineteenth century and early decades of the twentieth century, over half of Melbourne’s hotels had a female licensee.

This book, republished by Text Publishing in 2014 has had a longer life than you might think. The original 2003 book was originally drawn from Clare Wright’s PhD thesis from 2002, which itself grew out of her honours thesis which utilized oral histories with female publicans and their descendants. These academic antecedents are still here in this 2014 version of the book, but Wright’s lively writing style, even more pronounced in her later books The Forgotten Rebels of Eureka  and You Daughters of Freedom, ensures that the academic analysis enhances, rather than suffocates, the text.

She starts her book with an evocative pub crawl around Melbourne in 1889, from one hotel to another, where the publican is a woman. Right from the earliest days of convict settlement, the authorities were prepared to condone hotel-keeping by young single women.  During the gold rush, when liquor was ostensibly banned from the diggings, the sly-grog tents that flourished were often owned by women. Some women made sufficient money from sly-grogging to build hotels on the roads to the diggings where they became legitimate, respectable traders.

The legal framework regulating the liquor trade in Victoria was distinctly favourable to women because they were seen to ‘keep orderly houses’, reflected in the language that spoke of the licensee as ‘he or she’.  Most importantly, the requirement for pubs to offer accommodation (something that was not the case in Britain) meant that women were involved in creating a domestic, as well as drinking establishment. Nonetheless, with time, this came under threat.  The 1876 legislation, which aimed at cleaning up the trade after the gold rush, changed the language to ‘he’ and favoured male licensees, and in 1884 there was a courtcase that ruled that married women were prohibited from holding a publican’s licence.  This verdict threw the hotel industry into turmoil, but an Amending Act the next year preserved married women’s rights to renew their licences. Support for married women as licencees came from two unexpected quarters: the Licensed Victuallers Association who were ambivalent at first,  but were swayed by wanting to demonstrate the ‘respectability’ of their profession; and more importantly, the brewing companies who owned a number of hotels outright under the ‘tied house’ system, often using female licensees. In the midst of the temperance campaign around WWI, even the Women’s Christian Temperance Union, which campaigned vociferously against barmaids, was largely silent about female publicans with whom they probably had more in common than they wanted to admit.

‘Respectability’ was used by women publicans as both an attribute to make themselves valuable as licensees, and as a way of embedding themselves and their hotel as integral parts of the community. It was used as a way of controlling behaviour, too, by insisting that men not swear in front of them, and by not drinking with the men (as male publicans were wont to do) in order to maintain a respectable distance.

Because of the requirement for the publican to live on the premises, the pub was a home as well as a business. In the chapter ‘Mapping Elizabeth Wright’, she looks to the inquest records of the aforenamed Elizabeth Wright, who was murdered in her own hotel’s dining room by her business partner. Through these records, Wright (the author, not the victim!) is able to map out the Frankston Hotel spatially, and the dual and ambiguous family/business uses of many of the spaces. Female publicans, bringing up their families within this shared zone, did not have a separate work life but instead their children saw how they operated with authority and efficiency, as oral history testimonies demonstrate. In the final chapters of the book, she brings the female publican into the 21st century, with examples of female publicans in inner-city hotels (e.g. the Curry Family Inn in Collingwood) and  gastropubs (e.g. the Grace Darling, also in Collingwood).

I enjoyed this book. It is written with the same warmth and wit of Wright’s later work on Eureka and suffrage, which tie far more into the bigger historical themes of Australian history. It is not just a paean of praise to female publicans, because it has academic ‘grunt’ as well, although some readers may find this off-putting. There are enough personal vignettes for you to remember that you are reading about real people as well, and the sheer number of examples of female publicans drawn from right across Victoria reinforces that she is writing about a widespread, if overlooked, phenomenon.

9 responses to “‘Beyond the Ladies Lounge’ by Clare Wright”