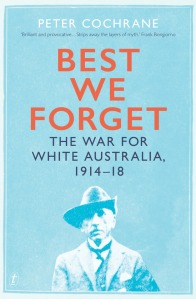 There are some books whose time has come, and I think that Peter Cochrane’s latest book falls into that category. Released by Text – a general publisher as distinct from an academic one – it comes at the end of a five-year tsunami of books and features about World War I and our ‘birth as a nation’ and ‘ANZAC character’.  These tropes have been pushed very heavily by governments, particularly (but not exclusively) by the present conservative government. But in this book, with its cleverly twisted title, Cochrane argues that the seeds of Australia’s involvement in World War I began in the half-century before 1914, when a self-governing and increasingly prosperous Australia began to feel the chill of its geographical location so far from ‘mother’ England, and the ominous size of the Asian populations that surround this island nation. It’s almost impossible to read this book today without a consciousness that, with the rise of China in the 21st century and the United States led by an erratic president, there is much in common between us today and the politicians and leaders of 1914.

Cochrane’s  book starts and finishes with a discussion of myth-making. Much of the popular ‘birth of a nation’, ‘mateship’ and ‘ANZAC character’ rhetoric springs from the writings of war-correspondent Charles Bean. But as Cochrane points out, Bean had been developing his argument that the Australian was a new type ‘hammered out of old stock’ and imbued with all the qualities necessary for military greatness, particularly mateship, long before World War I (p.7).  The true ‘Australian native’ was a clean man, a cleanness found ‘in the blood’ of the Anglo-Saxon race. He took this mental template with him to his WWI reporting and to his magisterial The Official History of Australia in the War of 1914-1918 which shaped Australia’s view of WWI for decades after. As he notes in his closing chapter, Bean’s characterization has strongly influenced popular memory, most particularly the shock jocks, right-wing politicians and allied intellectuals (and I would add, ambitious Directors of the Australian War Memorial as well) ever since.

But, Cochrane argues, this is not the whole story. It’s a rather uncomfortable fact that the first issue that the newly federated Commonwealth of Australia dealt with in Parliament was the Immigration Restriction Act, more popularly known as the White Australia policy.  Australia had passed race-based legislation right from the 1850s, in response to Chinese migration, and in 1901 as its opening act, it reasserted its identity as a ‘white man’s country’. This could be, and was, framed as an pledge of loyalty to the British Empire, but Britain for her part, by now had her own strategic interests in encouraging and protecting her relationship with Japan instead.  And as Germany became more bellicose and Europe more volatile, Britain proposed outsourcing responsibility for the security of the Indian Pacific to Japan – Japan!!- as a well-resourced ally instead. Cochrane argues that Australia’s willingness to fight in Europe was a way of proving our loyalty to Britain, to whom we were tied by race and culture, and leveraging that loyalty to ensure that Britain continued to look to the interests of her daughter Australia, and not the new ally, Japan.

…this idea of Australia as an Anglo-Saxon citadel, the last bastion of the purest and finest white blood, entirely ‘clean’, shaped defence thinking in Australia from the late colonial period onwards, in company with the fear that Australia might be left to fight an Asian invader alone. More importantly, this fear was the strategic concern behind Australia’s commitment to the First World War. The primary objective, of course, was the defeat of Germany, the survival of Britain and the empire, and the maintenance of those strategic, economic and sentimental ties that most Australians cherished. But most Australians also cherished their racial purity and that too was at stake, or so it seemed in the years before the war and during the war itself. (p. 9)

We are uncomfortable with the Immigration Restriction Act today, but at the time Australian politicians on all sides – liberals, conservatives, labour interests- saw racial purity as fundamental to upward progress of this newly federated nation.

The White Australia policy was not merely about keeping other types out. It was a desirable end in itself, racial homogeneity being a precondition for social reform and a high standard of living, for the constitutional vigour of the race, the high ideals, the upward evolutionary trajectory associated with the new Commonwealth. There was a vast reservoir of emotional investment in the coming nation.  ‘Race pollution’ was akin to ruin, while race purity was embraced as a positive ideal, the indispensible prerequisite for the principles on which white Australian social and political life was based. (p.46)

Cochrane’s book traces through the increasing anxiety from the 1870s onwards as Europeans moved into the South Pacific, evoking fears that a foreign power such as France, Germany or Russia might use Pacific islands as a launching pad for attacks, or worse – invasion, of Australia. British garrison troops were withdrawn from Australia in 1870, and Britain remained largely unmoved by Australian pleas to annex New Guinea, the New Hebrides, and the Solomons, as they had done with Fiji. Britain by this time was more concerned with European stability. Australia’s fear of Asiatic races was long established, burnished by the veneer of Social Darwinism.  The Anglo-Japanese commercial treaty of 1894 gave Japan, a powerful nation state with its own imperialist visions, honorary membership of ‘civilized Europe’ (p.41)  This set up an immediate conflict between the new Commonwealth of Australia, which saw itself as the last citadel of Anglo-Saxon race purity in the Pacific, and Great Britain which wanted its ally and business partner Japan exempted from the Immigration Restriction Act.

This anxiety over Japan explains Australia’s willingness to expand its military preparedness prior to World War I, introducing its civilian military scheme, and its panting readiness to assist Britain as a show of good faith. It’s as if Australia were the jilted child, jealous and edgy when a new adopted child is showered with favours. There is a strong sense that Australia was being ‘played’ by Britain.  While not sanitizing Billy Hughes as such, the book does make sense – if you accept the White Australia premise- of Hughes’ desire to introduce conscription to keep the troop numbers up, in order to bolster Australia’s position in the Pacific in the post-war carve-up at Versailles.

At the domestic level, politicians made no secret at all of the anxiety over Japan and Asia. It’s right there in their speeches, alongside fear of Germany and distress over Belgium. It was voiced on all political sides, and often. Cochrane doesn’t have to look hard to find examples, although just a quick survey of the newspapers of the time on Trove highlights that Germany was portrayed as the more potent foe. As with other histories that pack a punch, once a historian has alerted the reader to a phenomenon, it suddenly seems to be everywhere, hidden in plain sight. There seemed to be no embarrassment about proclaiming and defending whiteness and ‘cleanliness’ at the political level. However Cochrane does not conflate this political rhetoric at a national level, with the personal motivation that an individual soldier might have felt to enlist.

Cochrane does not deny the potency of the other spurs to military action, like fear of Germany and disgust over Belgium, but he does raise the question over why the anti-Asiatic rhetoric has been expunged from our popular memory of World War I.  This is a theme that he returns in the final chapter of the book, especially in the light of the Centenary of WWI:

Best We Forget is an ironic title. We do well to remember the Great War: the battlefield ordeals and the soldiers’ sacrifice. Yet, in the course of bringing a nation into being and fostering it to maturity, sacrifice takes many forms. We might also remember that nations are built as much in peace as in war; negotiators and conciliators count as much as warriors; inventors and visionaries have shaped Australia’s evolution as least as decisively as have the great generals; and, thankfully, debate and compromise have done more to shape our political culture than have the bayonet or the gun. (p. 229)

I think that, especially coming at the end of a long period of historical reflection, this book will be a stayer. Once alerted to the anti-Asian racism that underpins much of Australia’s war rhetoric, you can’t unsee it.  Nor can you sing ‘Advance Australia Fair’, written in 1878, without remembering that the word ‘fair’ can  (and at the time, did) have racial overtones.

This is an important book, well written as all of Cochrane’s work is, accessible and controversial. It places the war within a continuum of Australian history, rather than as a purely external disruptive event, and forces us to expand our view of ‘loyalty to the Empire’ to encompass uncomfortable truths.  Perhaps it’s not so much ‘Best to Forget’ but certainly ‘Best to Recognize’.

This entry was posted in ANZAC, Book reviews, World War I. Bookmark the permalink.