‘Tales from a Broad: An Unreliable Memoir’ by Fran Lebowitz BUT BEWARE! 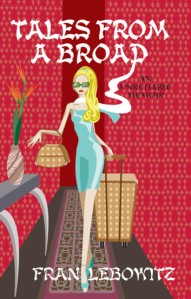 I read an interview conducted with Fran Lebowitz in the Age. Apparently she’s coming out to Australia, and I liked the sound of her sardonic humour. “A modern day Dorothy Parker” they said.  So I looked up the library catalogue and they had one book by Fran Lebowitz. I borrowed it.

What a mistake – on all levels.  A mistake to borrow it.  A mistake to persevere with such a vapid, self-absorbed book. A mistake not to ditch it and move onto something more enjoyable or uplifting or educational or worthy.  And worst of all: it wasn’t even THE Fran Lebowitz!

The plot (huh!): A New York literary agent and her husband shift to Singapore for his job, which was initially for a three-month stint, but extended into a three-year undertaking. Fran and Frank are absorbed into the expatriate community there, where they grapple with maids and sit around pools and bars drinking and gossiping.  Colonialism is alive and well….

It’s too silly to write any more. I feel robbed, on all levels.

Read because: I made a mistake

3 responses to “‘Tales from a Broad: An Unreliable Memoir’ by Fran Lebowitz BUT BEWARE!”