‘A Fuhrer for a Father’ by Jim Davidson 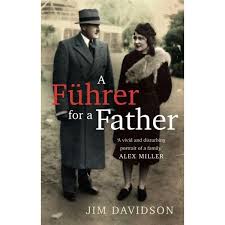 After reading a string memoirs written by women that seemed to excoriate their mothers, I decided not to read any more. I probably should have stuck to my decision when I picked up historian and Meanjin editor Jim Davidson’s A Fuhrer for a Father.  But perhaps a memoir about a father written by a son might be different, I thought.  Indeed, beyond Germaine Greer’s Daddy We Hardly Knew You (which I haven’t read) and Raymond Gaita’s Romulus My Father (which I have), I’m hard pressed to think of other similar books, written by sons about their fathers. [However, I see that Shaun Carney and Mark Colvin have both recently released books that exactly fit this category].  Furthermore, I knew that Jim Davidson is open about his homosexuality, and the question of a father’s acceptance of his son’s sexuality is an interesting one, particularly when the father is a domestic and forceful martinet with a string of relationships with women.  And besides, a historian can bring a particular eye to memoir, able to interweave the personal  with the broader historical picture, as Graeme Davison did so well in Lost Relations.  So, read it I did.

For the first half of the book, I appreciated Davidson’s depiction of 1950s-60s upper middle-class suburban life in Melbourne that had echoes of Barry Humphrey’s Sandy Stone character and, although set in an earlier period, My Brother Jack.  It is the juxtaposition of the theoretical and domestic that is highlighted in the subtitle of the book:  “The domestic face of colonialism”. When Donaldson read the historian AP Thornton’s remark that everybody has experienced imperialism in the shape of childhood, he rose from the desk and danced around the room (p. 53). For as a historian, this is how he conceptualized his father: a symbol and wielder of imperialism as a form of power. Born in South Africa, his father worked in Fiji as a surveyor on a gold mine, travelled to New Guinea, and later in life became involved financially in the sale of Aboriginal artwork.  Within his family he was strident, manipulative, bullying and controlling, not only with his first wife (and Jim Davidson’s mother) Olga, but also with his ‘second family’ of Eve and his half-brothers Garry and Hank. The juxtaposition of colonialism and domesticity is a powerful and rich observation, and Davidson explores it in the first part of the book and reverts to it again at the end:

Imperial dominance rested on patriarchy – was almost its outward projection. This book has been an exploration of one telling example of that nexus….For Jim [i.e. his father] became an anachronism, an unbending projection of the past. His idea of indigenous people had been engendered by family experience of Africa, the romances of Rider haggard, and his own quest for the exotic in the Islands. (Arnhem Land was an autumn romance). Everything was firm, unequivocal, and placed him at the centre of events, which he felt enabled and entitled to control. The contest with various opponents was the thing; his women and children were just auxiliaries. Livestock. (p 251)

However, much of the last half of the book is a long, petulant complaint of one grown man as son against another grown man, his father.  While there is always an element of remaining the child in relation to your parents, in many ways Davidson seemed content to remain the dependent.  Money became a particularly fraught expression of their relationship. There are long complaints about being ‘written out of the family’ and especially being written out of the will.  Yet at the age of 48, his father was still giving him money for overseas trips, and he did not demur at the $10,000 being handed to him by his father here and there (as he interprets it, as a guilt payment for the will that was to follow.) At a more mundane level there are interminable reports of Christmas Dinners replete with bad behaviour on all sides, including Davidson, who hurls his Christmas presents at the recipients before storming out and deliberately choosing presents with nettles of malice.  It’s unpleasant, petty and reflects poorly on everyone.  Even his closing words reveal Davidson’s relishing of the ultimate last word:

I suspect [my father] rather fancied a book being written about him; the devil would be in the detail. Well, here it is…Not quite the book he wanted. (p.255)

Not one of my better book choices.

3 responses to “‘A Fuhrer for a Father’ by Jim Davidson”