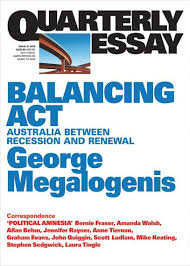 Quarterly Essays, with their generous word length of about 25,000 words often provide a deeper analysis of current topics than you’re likely to find in newspapers and magazines.  The most recent Quarterly Essay, however, didn’t really offer me much that I hadn’t already read in other progressive-side publications like Crikey, the Monthly or the Saturday Paper.

George Megalogenis  starts with a quick overview of the past thirty years of Australian politics and the imposition of the “open model” of the economy during the Hawke/Keating years. His aim, Megalogenis says, is to explore how to augment this open model in a time of transition. In particular, he looks critically at the past fifteen years, with six wasteful years under Howard as the proceeds of the mining boom were squandered and six combative years under Abbott.

History, he claims, shows that the governments that transformed the economy were generally Labor ones and not conservative- in particular Curtin and Hawke.  He notes that in both these cases, Labor had remade itself after a period of opposition: something that the current Liberal/National coalition has not done with Abbott on his wrecking-ball spree during his time in opposition. He notes that the rapid change of prime ministers is not necessarily a present-day aberration because in the first ten years of Federation there were seven changes of Prime Minister. However, the crucial difference was that there was continuity of policy rather than the “throw it out” mentality with each swing of the electoral pendulum that we have sen in recent decades.

Rather than harking back to the golden reforming days of Hawke and Keating so beloved of economic writers, he turns instead to the post-war reconstruction activities of Curtin, Chifley and Menzies as exemplars of policy-driven and infrastructure-led responses to changed circumstances. Such policies were not the preserve of any one side of politics and  similar policies, he suggests,  might hold the key to the shift from recession to renewal so heavily promoted by our ebullient Prime Minister.