‘To Name Those Lost’ by Rohan Wilson 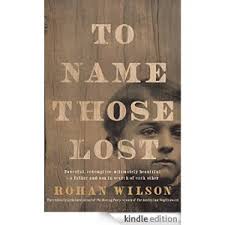 Although there are a couple of convict stories set in  colonies other than Tasmania, the genre and stereotype is almost synonymous with Van Diemens Land ( For ‘other colony’ stories I’m thinking particularly of Jessica Anderson’s The Commandant and Patrick White’s Fringe of Leaves,set in Queensland; and  Kate Grenville’s colonial trilogy and  Keneally’s The Playmaker  set in Sydney).  The fifty years that Van Diemens Land served as a penal colony threw a long shadow, one that is still being explored in the Founders and Survivors Project in recent years.

Rohan Wilson’s second book To Name Those Lost is set in Launceston in 1874, some twenty years after transportation to VDL ceased, but for those expired convicts, uprooted to the other side of the earth and now set adrift, it is a hard place.

Tethered  on a real-life riot in Launceston in summer 1874, Wilson’s book traces the hunt between two fictional ex-convicts Thomas Toosey and Fitheal Flynn as they pursue each other through the streets and bushland surrounding post-convict era Launceston.  Thomas Toosey is searching for his young son, cast adrift after a stroke killed his mother, while Fitheal Flynn is accompanied by a silent, hooded figure.  The town itself is heaving with dissent over a tax imposed to bail out a failed railway company: a scenario not unknown to us today.  Thomas Toosey appeared in Wilson’s earlier book The Roving Party as one of John Batman’s posse during the Black War, and here there is a hunting of a different kind.  The narrative has twists and jerks; there are surprises; there is resolution.

I particularly liked the way that Wilson captured the more-formal tone of a nineteenth century narrative.  He animates the voices of ex-convicts, brought to VDL already with their accents formed, and those of their children born in this new, co-mingled colony.  His description of Launceston was historically-informed without descending to Trove-based historical visual tourism.

However I did, I must confess, have difficulty with imagining Launceston in summer, having only visited it in winter, even though I know that it does get hot there too. The descriptions of Launceston kept evoking for me images of small-town America, and I found it hard to stop imagining  Toosey and Finn as cowboys. Many readers have likened Wilson to Cormac McCarthy as a writer, and I can see why.  Wilson takes pains to underline the Australianness of his landscape, and the British (rather than American) nature of his characters, yet the Americanism keeps soaking through and I don’t know what- if anything- Wilson could do to prevent this.

In an appearance at the Adelaide Festival Writers Week in 2015, Wilson spoke of the research that went into this book, and the effect of reading about the Launceston riot as a trigger for the setting of the book.  He almost underplays the historical understanding that the book displays of the generational effect of convictism and historical change in Tasmania, but it is certainly there.  This book is, surprisingly, about love between parent and child, and  the bequest of opportunity between generations in this most unlikely of settings and among the most unlikely of founding fathers:

The chiefly gift of parent to child is this, to bed down the land with their ash and make a place where fire will breathe and be warm, and the debt is told in beads of white smoke, the furrowing heat.  And the sound of love is to name those lost who lived for others. (p. 295)

I enjoyed this book very much, and there is much to admire in Wilson as an attentive, talented new writer.

An aside: Rohan Wilson’s PhD related to his writing can be found at:

This entry was posted in Australian literature, Book reviews. Bookmark the permalink.