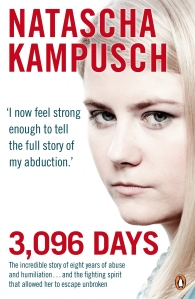 I must admit to ambivalent feelings when reading this book.  Was my interest prurient and unworthy, or was I honoring her own story, given in her own words, above the use that journalists might make of it?  What ever my motivation for starting the book, I found it a distressing read and yet I felt that I owed it to her to finish it. The events that she wrote of made me often feel as if I was suffocating.  Unlike this poor, captured child, I knew that there would be a ‘happy’ ending, and I marvel at her ability to transcend let alone survive this ordeal.

Natascha Kampusch was kidnapped by a stranger at the age of ten while walking to school, bundled into a white van, then kept in an underground cellar for eight years.  In many ways her abduction is a text-book example of the warnings that children were given in that time when children did walk to school (as distinct from being driven by their parents).  The darkness, constriction and the incessant sound of the exhaust fan bringing air into her room were physical imprisonments, but there was also the emotional manipulation as well where her kidnapper oscillated between being her provider, saviour from worse fates, abuser, companion, domestic martinet and jailer.  It is probably the intermingling of these roles that renders Kampusch unable to see her kidnapper, Wolfgang Priklopil, only as a monster. He committed suicide on the day she escaped.  She angrily rejects her compassion and ambivalence towards him being characterized as Stockholm Syndrome, arguing that this denies her the right to analyse and describe for herself the complexity of the relationship.

There are no pictures in this book, and I think that I am glad of that. Instead, we have her own words, and her own story.  She is owed that.